For high heads and small flows

This hydro turbine, which is of the free-jet type, had been invented around the year 1880 by the American Lester Pelton. Bucket-like blades are attached to its runner, subdivided into two half-shells respectively by a sharp edge.

The water flow may be influenced through one or several needle jets that may be controlled finely. The water leaves the nozzles, hitting the subdivided runner blades tangentially. 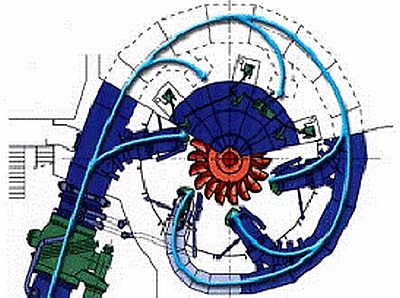 The water jet is deflected in the hollows of the blades by almost 180 degrees, transmitting its energy to the turbine. So the water exclusively acts on the turbine runner through the deflecting pressure that is produced.