Carl Myers says that alternative methods such as reed beds and willow coppices could soon be used as a means of domestic effluent treatment in the UK.

Water supply and sewage treatment have generally been viewed as a natural monopoly in the UK. Following privatisation of the water industry in England and Wales, the 1991 Water Industry Act allows firms to compete for the provision of services around the country.

The industry regulator, OFWAT, is now considering one water company’s application to supply drinking water through another’s pipes. This is provided for in principle, but there are complicated practical hurdles to overcome.

Sewage treatment, however, is not subject to the same concerns and seems much easier to open up to competition. Any firm can now apply to OFWAT for the status of an ‘inset company’, to compete for the provision of certain effluent treatment services.

OFWAT is currently processing 15 ‘inset’ applications, 11 for sewerage, and one for sewerage and water supply. This element of competition could reduce costs for consumers, and also give them more say in the choice of treatment technology.

Stroud District Council is commissioning a feasibility study into the use of alternative methods, such as reed beds and willow coppices, for the decentralized treatment of domestic effluent from three villages in the area.

Appalled by the local water company’s failure to resolve sewage problems, the Council is meeting OFWAT to discuss the possibility of setting up a cooperative-based inset company to provide local sewage treatment services.

According to District Councillor, Doug Booth, some 30% of households in the area are not connected to a main sewer, and many of the septic tank systems installed after WWII are now inadequate.

The District has had problems with overflows of sewage onto land and into rivers, due to high rainfall. When the overflow occurs during rainfall, the sewage is quickly washed away, but when it occurs after rainfall or due to a collapsed sewer, it can linger and cause greater risk to the environment and public health.

It is well known that the District has suffered outbreaks of meningitis, a virus commonly found in sewage. Although there is no direct evidence, the possibility of a link between the cases of meningitis and sewage problems has raised some local concern. According to Booth, as the water company appears reluctant to invest money, and more concerned about profits for its shareholders than issues of public service and public health, a local initiative is attempting to provide an appropriate solution.

In one of the villages in question, Claypits, which has a population of about 100, the overflow from septic tanks runs down a ditch that drains into a local stream. It is estimated that construction of a trunk sewer and pumping station to carry effluent to the nearest sewage treatment works (STW) would cost at least £250 000.

Local water consultant, and former UK sales director at Bauer, Julian Jones, has proposed a ‘functioning landscape’ system using reed beds and willow coppices to treat the village’s effluent. Jones estimates the system would cost less than £250 000, and could provide a substantial proportion of the village’s energy needs in willow biomass.

According to the National Rivers Authority (NRA), the ‘proposals appear adequate . . . reed bed treatment for small communities is a well-established alternative to existing treatment methods.’

In the view of Booth, ‘the project seems both economically and environmentally very sound.’ He is keen to set up the scheme and to prove that it works, since it could have potential for many other locations with similar problems.

According to the Water Research Council (WRC), the use of willow coppices has only really started attracting research over the last couple of years, hence at present such systems are likely to be designed with a high safety margin in mind.

In cooperation with other European companies, WRC is currently applying for EU funding for a research project involving the application of sewage effluent to willow coppices in four large-scale field trials in Europe.

There are many arguments in favour of using functioning landscapes such as reed beds and wetlands for sewage treatment on a localised basis.

Firstly, investment and operating costs are substantially less than for conventional methods. Secondly, separating sewage from industrial effluent and stormwater would mean it could be used as fertilizer instead of being disposed of at a higher cost while farmers buy artificial fertilizers.

As well as being costly, pumping sewage and stormwater to centralized treatment stations short-circuits the hydrological system, reducing river flow and aquifer recharge and contributing to ‘artificial drought’ conditions.

Returning cleaned water to the ecosystem close to where it is used increases aquifer recharge and river flow, and allows for more natural cleansing through the river system.

The main argument used against the use of reed beds is lack of space, yet UK taxpayers are currently paying for farmers to set aside 10% of the nation’s arable land to lay idle.

Centralized sewage treatment and disposal dates back to the 19th Century, and such an ingrained concept is slow to change. Wetlands have always served as ‘nature’s kidneys’, but their potential for effluent treatment is only recently starting to be recognised.

Yet with most towns of over 2000 inhabitants required by EU law to install secondary sewage treatment by 2005, there could be ample scope for application of the decentralised approach in areas like Stroud. 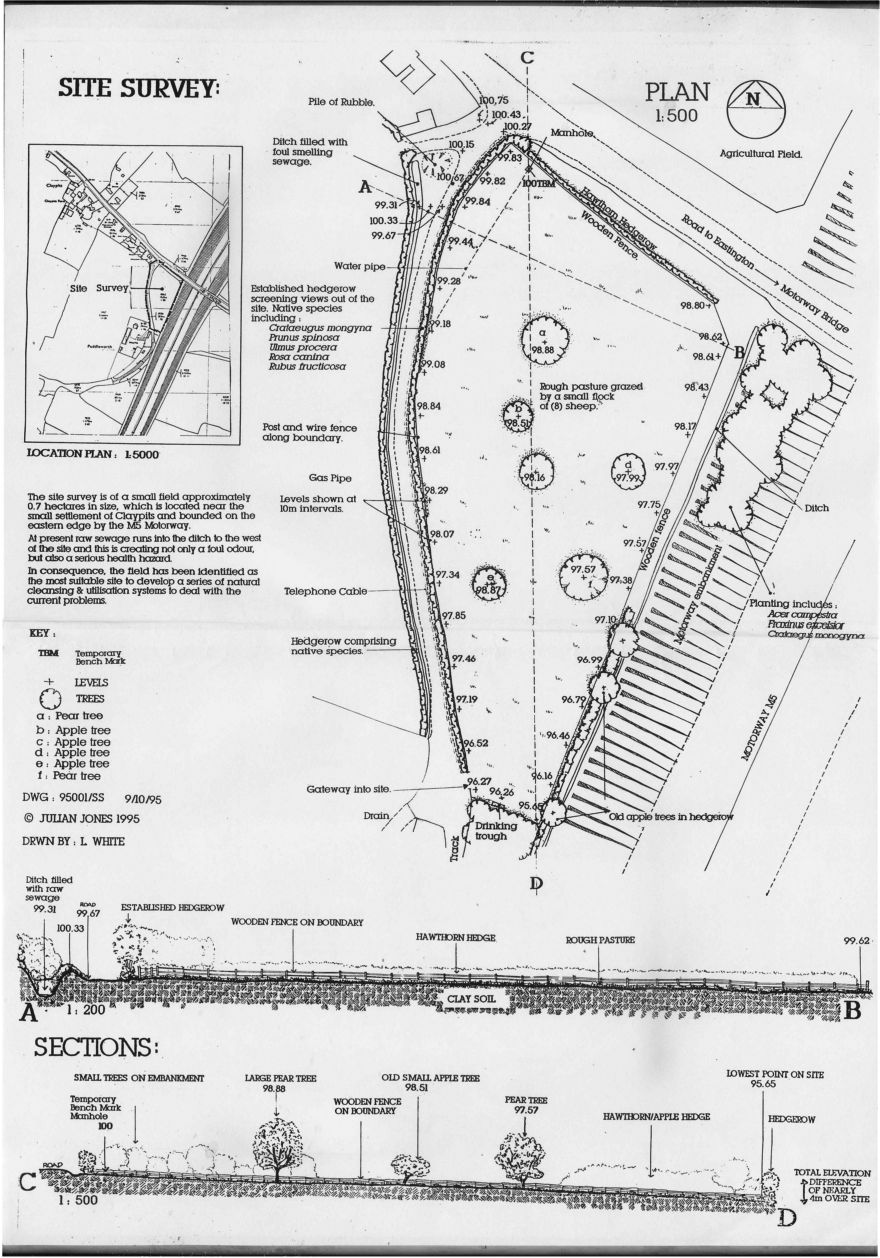